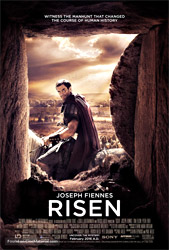 Risen is a 2016 film starring Joseph Fiennes and Tom Felton that tells the story of a fictional Roman tribune, Clavius, who is tasked with finding the body of Jesus after it has apparently been taken from the tomb.

Because I appreciate the new approach to the story of the Crucifixion and the Resurrection.