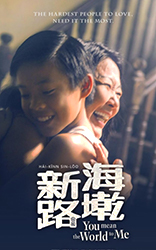 Saw Teong Hin’s latest, Hai-Kinn Sin-Loo 海墘新路, is Malaysia’s first Hokkien movie. It goes by the English title of You Mean the World to Me, although the Hokkien title actually refers to Penang’s Victoria Street. (I prefer the Hokkien title.) HKSL is the story about Sunny, a director who returns to his hometown, Penang, to make a movie about his family in an attempt to find some redemption and some closure about a traumatic family secret.

I tried to write a proper review but got stuck so back to my usual spoiler-y list-form it is.