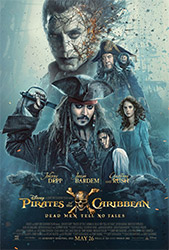 Jack Sparrow apparently has a neverending list of people who hate him. This time it’s a Spanish naval officer named Captain Salazar (Javier Bardem), who has been condemned to an undead life after Jack trapped him in the Devil’s Triangle. Will Turner’s son, Henry (Brenton Thwaites), is seeking Jack as well. He thinks Jack Sparrow can help him find the Trident of Poseidon, which can purportedly control the seas and break any curse – such as the one binding Will to the Flying Dutchman. Jack and Henry end up with two more new friends in Carina Smyth (Kaya Scodelario), a scientifically-minded woman who knows how to locate the Trident, and Captain Barbossa.

I think I would have really liked this movie if it had been more heavily centered on Henry and his quest to save his father. Or, better still, if the movie had been about Henry and Elizabeth going to find this Trident and running into Jack along the way. It kind of started out as being centered on that, but very quickly got swayed to the Salazar storyline and that took over completely.

The one thing that Will Turner as a character had over all the others (Henry, Elizabeth, Carina, etc.) is that he really made Jack Sparrow a more rounded character instead of a one-dimensional wisecracking, selfish pirate. They start off as enemies (Will tries to kill Jack when he first meets him in his blacksmith’s workshop) and end up as friends (Will saves Jack from the gallows at the end of POTC1). Their friendship is rather rocky and confusing at times throughout POTC2 and 3, but at the end of 3 Jack chooses to save Will by letting him take Davy Jones’ place instead of doing so himself. That one act allowed Jack’s good side to come out, and made for a nice rounding-off of a friendship that started out as the complete opposite in POTC1.

What I think has happened since the third movie is that Jack’s selfishness has been allowed to take over. His motivations have always been extremely self-centered, but he seemed to have a tiny soft spot for Will Turner and Elizabeth Swann (even if he did recoil at finding out Henry’s their “spawn”), which made him a lot more bearable. It’s like how Pepper Potts makes Tony Stark more appealing to viewers. But in the fourth movie, Jack simply didn’t have the same rapport with the Will and Elizabeth replacements. So it didn’t sit as well with viewers. Perhaps in this fifth movie, they should have emphasized Jack’s friendship with Will much more. Instead it came across as Jack wanting the Trident so he could take over the seas and regain his glory again, instead of really wanting to help Henry break the curse of the Flying Dutchman.

So while I did enjoy this movie, I think there was a missed opportunity here to have really put it on par with the original movie. In fact, it might have been a good idea to view the Pirates of the Caribbean series of movies as the story of Will and Elizabeth and Captain Jack Sparrow. Jack is there to facilitate the story of Will and Elizabeth. So if the fourth and fifth movies had been about the attempt to free Will from the Dutchman, and if it had concluded here in the fifth movie with that happy ending, I think the series as a whole would have been hugely improved.

Note: I went back to my review on POTC4. Apparently I said it could be considered almost equal to POTC2. HAHAHA As if. I guess that was my first impression. Six years later, I don’t remember 98% of that movie but I can still recall a good deal of the first movie and fair amounts of the second and third. Will this movie hold up six years later? Or will I have changed my mind? We shall see.