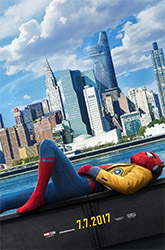 (I’m using one of the teaser posters here because the actual poster for the movie was astoundingly bad for a Marvel film.)

Thing to note: I was never a huge fan of Spider-Man. I thought the first two Tobey Maguire ones were okay, didn’t see the third one. I thought Andrew Garfield was okay too but I only saw the second movie and not the first.

Spider-Man: Homecoming is the Marvel Cinematic Universe’s crack at its own version of Spider-Man. Peter Parker (Tom Holland), still highly enthusiastic after Tony Stark recruited him to help out in Berlin (during the events of Captain America: Civil War), is growing more and more disappointed and frustrated by the lack of missions following that exciting incident. He comes across underground trade in weapons made out of scrap materials from Avengers-related incidents such as the Chitauri invasion, and takes matters into his own hands. But he’s also still in school, and this does not make things any easier.

My overall rating: ★★★½
It’s a watchable movie, but not my favourite in the MCU.