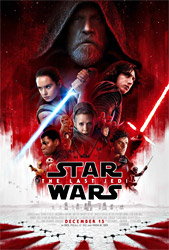 The Last Jedi apparently picks up almost immediately after the end of The Force Awakens. We find the First Order chasing down the Resistance, Rey begging Luke Skywalker to return and help, and Kylo Ren not quite recovered from his duel with Rey.

From this point on, there will be spoilers. Lots of ’em.

In conclusion… If forced to pass judgement on this, I would say the movie is good. Better than The Force Awakens. But will I go running to see it again immediately? Probably not. I might, if people coax me to, but I certainly don’t have the reaction I had with Rogue One (“I really want to see that second half again!”) or Thor: Ragnarok (“I must see it again. ASAP”). I think I am far too attached to the previous characterisations of Luke and Leia (and Han) to enjoy this in a simple, unbiased manner.