Dropping a line on my blog from London~ (Well, Hemel Hempstead, really.)

Was out yesterday in London city but got caught in a massive traffic jam on the way back to my aunt’s house from Greenford station – it took us 5 hours to get back. @_@ And so, due to exhaustion, I’m not out today. But I must get out tomorrow. The museums are calling to meeee.

I was supposed to meet Rani at the Natural History Museum yesterday but got there before she did so I went in first. And spent 1.5 hours gawking at fossils. That’s just one section of the museum. When Rani – and Arun – found me, they asked, “So what have you seen so far?”

Expectant smiles, waiting for me to continue.

“No, I mean, I’ve been here since I came. In this section only.”

They must’ve figured it was a mistake agreeing to meet me there at that point. ahahahah And to think I was only 3/4 through the dinosaur exhibit when they found me. 8D

Rani was shocked when I said I’d never been to London before this and demanded to know why I chose the museum first, of all things! I dunno. But why not? I loooove this sort of thing. Those technological museums don’t fascinate me so much (y’know, like those that talk about engineering and such) but nature and historical ones do. I’m probably a bit nuts, but I don’t care~~

Anyway we dropped by Buckingham Palace, pitied the poor beefeaters for a while (could only see them through the gate anyway, and besides, it was raining) then hurried off to have lunch. Then before they left, they showed me to the British Museum, which I proceeded to explore for about 45 minutes before leaving to catch the train back to Greenford. Not that I really “explored” the museum. I wandered into the Egyptian section and stayed the entire 45 minutes. I didn’t finish it though – didn’t even manage to absorb half the info there was because I was short of time.

I think I need a day for each museum. Or more. But at the very least, a day each! I expect at least another half hour to finish the dino exhibit…

And of course, the time I need increases when they allow photography!

But I think I’m the type that should really just go alone to museums of this type. No one else I know would have the amount of interest required to stand around and read every label and just look at everything. (Seriously, I was looking at fossils and dino models and thinking things like: Did their neck bones really look like that? Oooh, five toes! Eee, were baby dinosaurs that cute? LOL, dino stampede. I wonder what use that weird lump was for besides headbutting each other…)

I’m rather glad I went into each museum alone first though. Because each time, I was just speechless (and snap-happy).

In the NHM there was an impressive diplodocus skeleton straight-off… 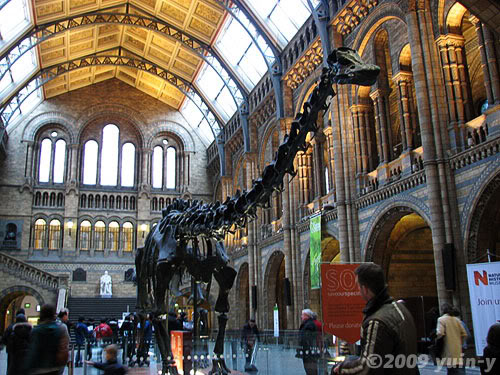 … and in the British Museum’s Egypt section, one of the first things I noticed was a huge half-statue of Amenhotep III. 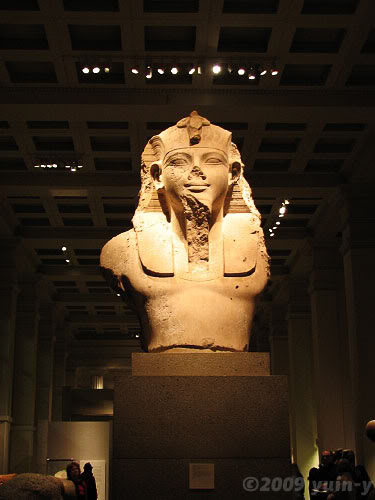 The Rosetta Stone should have been the first thing I saw there but there was a huge crowd around it so I barely glimpsed anything besides the top of it. boo. But I’ll see it when I get back there!!

So to this person who spent a lot of her childhood watching Discovery Channel and who knew by 14 that Bob Barker was a well-known paleontologist and that Zahi Hawass is the expert on Egypt, these were maybe some of the best exhibits to start with.

(I took some 300 photos yesterday. 95% of which came from the museums.