It’s difficult to edit a lot of  photos without a mouse or a graphic tablet so larger photo posts will have to come once I’m back in Edinburgh. But here’s a glimpse at some of the Elgin Marbles in the British Museum from my trip there on Sunday.

The Elgin Marbles are what people generally call the Parthenon sculptures and architectural pieces that currently sit in the British Museum. It’s about half of what’s left of the Parthenon. No wonder the Greek government keeps pestering them to return it all, just like how the Egyptians want their Egyptian statues and mummies back. The BM has a lot. haahaha But then, I guess in a sense they’re indebted to the British for actually preserving that much of it. Who knows – if the British hadn’t taken all those pieces in the first place, they might not have lasted until now. I’m just glad I got to see them. ahahahah 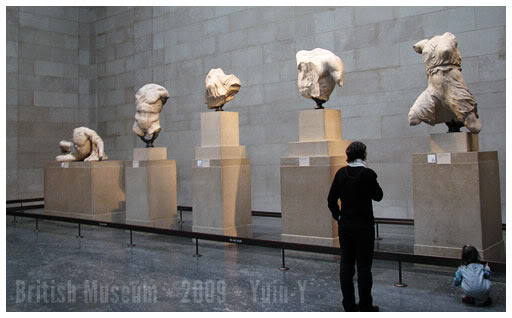 The statues (statue remainders, rather) from left to right in the pic: a reclining youth, a figure assumed to represent Hermes, Athena, Poseidon and Iris. Just thought you’d like to know – even though it’s pretty much impossible to tell from those fragments. If I said they were Apollo, Zeus, Hera, Dionysius and Hebe you wouldn’t know the difference, would you? 8D