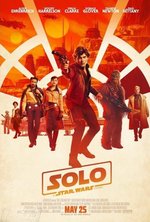 Where do I begin?

Overall comment: It is a decent movie; watchable and enjoyable if you’re not thinking too hard (or if you don’t have prior attachments to the stories in the old books). But it’s not great. Probably the one I like the least out of the 10 Star Wars movies at the moment. Or maybe it ties with The Force Awakens at the bottom.

I tried to like it. And it is watchable. But I have absolutely zero inclination to rewatch it or really give it much thought. I’d rather watch Infinity War a third time… Or Rogue One. Or see Thor: Ragnarok for the fourth time. haha