Was watching a stage adaptation of the anime “Prince of Tennis” last night and when watching the backstage clips, the camaraderie of the cast struck me so hard it sent me reeling back 5-6 years, leaving me a pretty severe case of nostalgia and a sense of “I-miss-that-a-lot.”

Thinking about my two favourite plays, two scenes popped into my head and I just had to draw them today. This is more for the former fireBRANDS, since you’d remember those scenes.

Just very fast sketches anyway – I think under 15 minutes for both, and then quick ink lines, hence the imperfections. 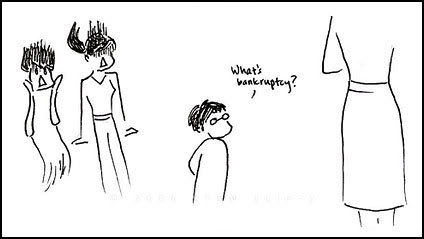 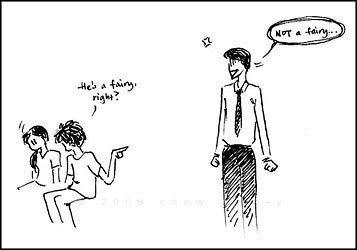 Yea, the expressions turned out quite manga-like. What to do. I’ve been reading manga a lot this holidays. (More like, re-reading what I have.) I find their way of drawing expressions funny. Hahahahah

Having worked with different groups of people over so many years (although a few “regulars” pop up in most instances), I’ve figured out my own personal favourite cast members. In no particular order:

And ‘special mentions’ in my nostalgic reverie went to:

June Fern, for that splendid bit of acting in our Ananias and Sapphira skit at Youth Camp 1999. That slap-and-fall sequence was the most realistic one I’ve ever seen on amateur stage. How she and Jack managed to time the slap and the consequent reaction so well I don’t really know. Gave me a bit of a fright though, when Jack nearly hit the drum set on stage when he “collapsed”…
Henry, for his fun portrayal of a naive youngest brother in A Miscommunication. I think he carried it off well, considering that he was actually older than the two playing his elder siblings in it.
Ee Laine, for that scene-stealing performance in Wish Upon a Star. Who knew that talking to your shoe as therapy could look so utterly hilarious on stage (instead of just plain stupid as it might have been if not for her)? I’m so glad Josh and I decided on that change of cast for “April,” “May” and “June.”
Jason & Jia Wern, for a most accurate display involving an imaginary object and mini-explosion. You helped make that project a success!
Joon Qing, for his slightly-manic Egyptian soldier act waaay back in Youth Camp ’97. “I kill, kill, KILL!” and “I stab, stab, STAB!” Fortunately it was only imaginary babies he was killing, and not real ones.

Then I realised I have SO FEW photos of “Wish Upon a Star”! *cries* And the video tape I had of it… I lent it to someone a few years ago to do some editing for youth stuff or something and I never saw it again. >

*wants to direct for the stage again*

5 thoughts to “All the World’s a Stage.”