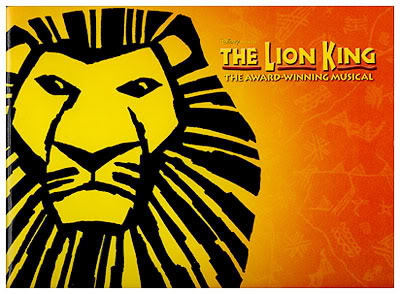 This might very well have been the highlight of my winter break, although it’s really hard to say which one I enjoyed more – this or the museums. It was a different sort of enjoyment. The museums were an intellectual paradise. This was… well, taking into account that I’m pretty much Disney-mad, that The Lion King is one of my favourite animated films, that I enjoy going to the theatre, and that I’m kind of an art-and-design person… It’s a sort of dream come true? ahahah 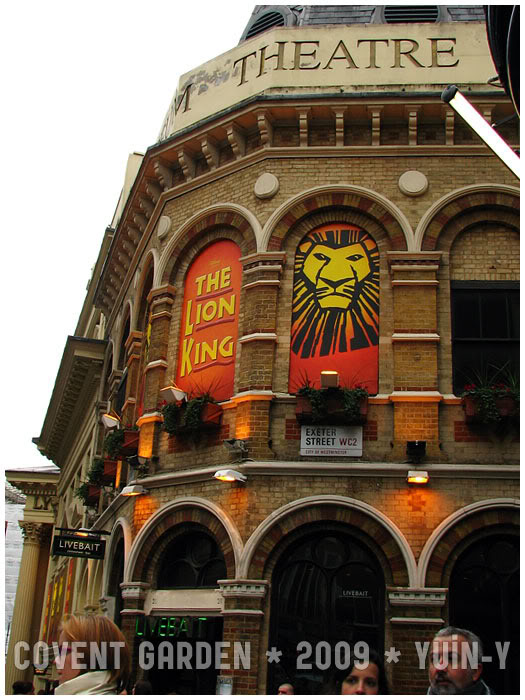 It was a little weird going to see a play all by myself – especially on Christmas Eve, when so many people were there in groups or with their kids. But I just kept telling myself: If you don’t see it now, you may not be able to see it ever! So enjoy! 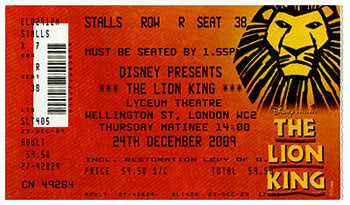 Before the play began, so many people were happily snapping photos of their kids that I squeezed out the courage to take out my camera and get a couple of snaps of the interior.

This is the curtain: 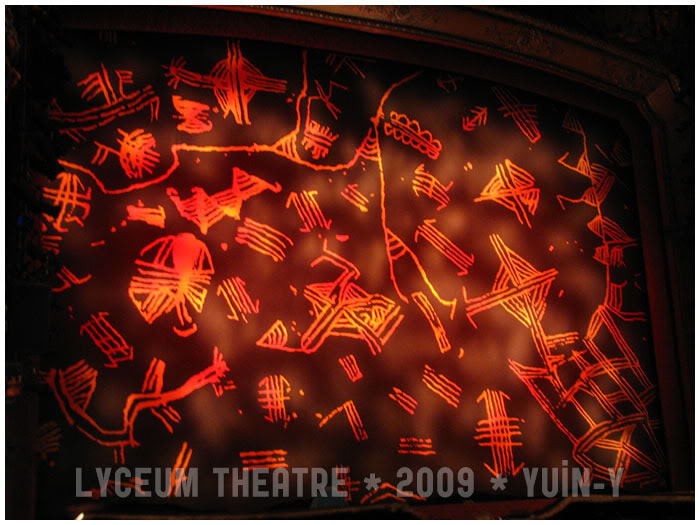 And the view of the upper floors from my seat: 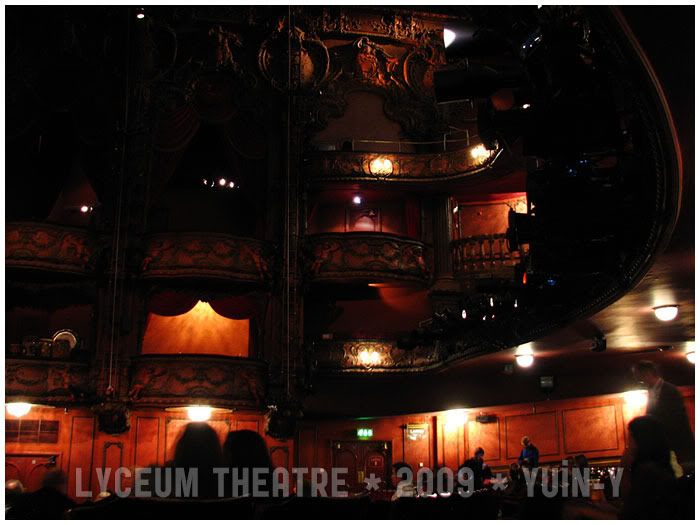 How to describe where I was seated? Like, you know how the ground floor of a theatre hall is usually divided into six segments for easier access? Three blocks in front, three blocks at the back. So I was in the front row of the left back block. Did that make sense? lol.

Obviously I have no photos of the actual play, but I did get the photobook. It cost me £8 but it’s so worth it in my opinion. I scanned the cover (the very first pic in this post) and another page but felt lazy after that and just took photos of some of the other pages. Scanner’s not that big so in order to get the pics – mostly double-page spreads – I’d have had to scan two pages for one pic. Too much effort. Photos enough la. ahahahah

(Note: The cast in the pictures aren’t the ones I saw because the photobook consists of pics from the various Lion King casts around the world, like the US, UK, Japan, Australia… But the costumes and the sets are the same. )

The Circle of Life!

When the “animals” started coming out and heading to Pride Rock (which spun slowly up from the stage floor), some even came down the aisles towards the stage! I’d no idea that would happen so when the elephants and some others came ambling down the aisle, it was somehow just so thrilling. And more so when an… uhm… shucks, I don’t know what it’s called. The bovid with curled horns (see the ones on the far left and far right of the pic above). Yea, anyway, when one of those walked right past me, I just felt like, Heeeee! It’s walking right past me! I think I totally reverted to a kid again for about three seconds.

It’s a bit embarrassing, but I teared up a bit during this sequence. I think it was a combination of (1) the wonder of actually being there and seeing those spectacular costumes, (2) the thrill of seeing a play I’ve been longing to see ever since they started it,  (3) the fact that I was already half-sick (spent Christmas day and Boxing day sleeping off the flu) and (4) hormones.

The photobook had a few pictures of the Japanese cast of The Lion King and I just thought that it wouldn’t be the same watching this if the main cast was Asian. For one thing, the voices! Especially for a role like Rafiki’s which requires really spouting Swahili (or whatever African language it was). It wouldn’t sound the same. And another thing is that you can see the actors. The costumes don’t totally cover them.

Scar and Mufasa. See what I mean?

The costumes were ingenious! I loved them. It was almost bizarre how some of them really looked like the actual animals in silhouette. Cases in point: the elephants, giraffes and the hyenas. Seriously. Not so much for the lions, but the rigs for Scar and Mufasa fascinated me. When the actors stood upright, the masks kind of bobbed slightly above their heads, not obscuring the faces. But when they bent or leaned forward (as in the pic above), the masks seemed to come down to face level. So interesting!

Grasslands chant sequence, with Rafiki in the middle:

Pic of the lionesses, and in the background part of the dance for the lioness hunt:

Nala and Simba in trouble! (I thought it was cute how they did Nala’s hair to look like lion ears.)

Here’s a closer look at the Shenzi, Banzai and Ed:

The hyena rigs were really interesting too. When the heads didn’t need to move, the actors’ hands moved the front legs. When they needed to control the heads, then one hand would have to work the head. No wonder Julie Taymor won awards for the costume design… 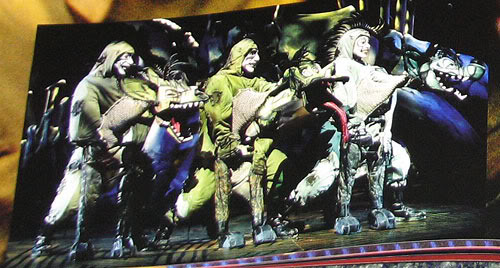 Set design was cool too, especially in the wildebeest stampeded sequence. So well-staged!

In the back was a rolling screen with stampeding wildebeest prints and in the middle was a rolling something-or-other with wildebeest models on it (so it looks like the beasts are just streaming downhill). Then in front, just behind Simba, are the “real” wildebeest. I thought that was just an amazing setup. I believe Richard Hudson won for best set design as well the year this came out? 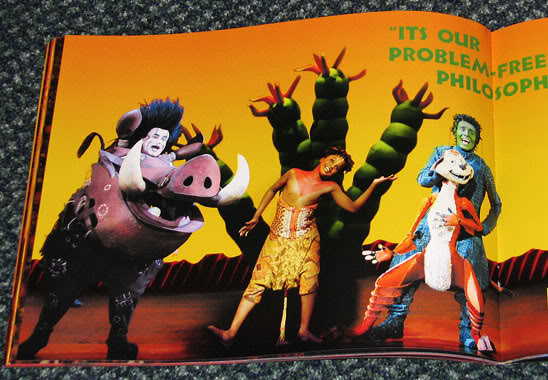 A closer look at the gazelles. Again, brilliant costume design…

Back cover of my photobook and a look a t the giraffes in silhouette with a cheetah in the foreground. 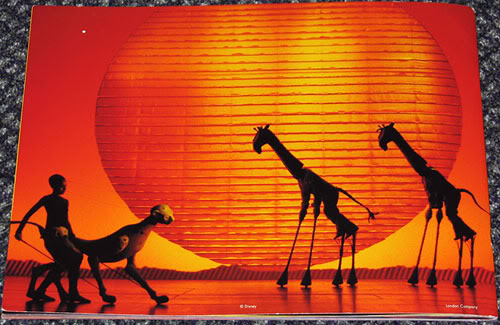 Some of the song rearrangements weren’t quiiite to my liking, and the dream-like sequence in Can You Feel the Love Tonight wasn’t that great to me. I really liked Zazu’s The Morning Report though! Fun lyrics: Chimps are going ape,  giraffes remain above it all / Elephants remember, though just what I can’t recall / Crocodiles are snapping up fresh offers from the banks / Showed interest in my nest egg but I quickly said, “No, thanks!” / We haven’t paid the hornbills and the vultures have a hunch / Not everyone invited will be coming back from lunch! Love the wordplay there.

I tend to have particular favourite cast members in the plays I watch, like how Lumiere was my favourite when I saw Beauty & the Beast in KL with Anna. This time I found Zazu and Scar outstanding. Scar had that clipped accent and a bearing that seemed to me totally perfect for the role. Actually I felt Mufasa was pretty good too (the Mufasa aura!), but he dies so early it’s hard to form a particular attachment to him. ahahah

Overall I really liked the play. I think it did justice to the movie and the designs were just awesomeeee. I know it may not be the best play ever or anything, but I like it anyway~

Great. Now I feel like watching it again. Must make note to go again if I have time when I next go to London. ahahahah

4 thoughts to “London: The Lion King”