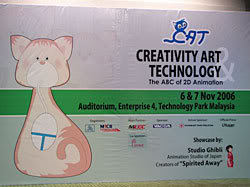 Having no classes on Monday, I went for the CAT Conference in Technology Park with Eileen and her housemate I-En (both Limkokwing students). As you can see on the left, “CAT” stood for Creativity, Art and Technology. It was organised by Transtel, and free to students and people in the art industry. (Keyword here is FREE.)

Personally, I thought the logo was rather sad for a conference on creativity and art. There was something about incorporating a cat with the letter C, but it could’ve looked much cooler. And if that big cat with a mouse in its mouth (hahah – I only just realised the “cat and mouse” visual pun while writing that sentence) was the mascot… I’ve nothing to say about it. Okay, that “cat and mouse” joke is kinda funny now that I see it, but design-wise I don’t think it was all that attractive. Wonder why they didn’t try and get a more designer-ish logo and mascot. Though there were technical companies and stuff involved, it is a conference for the design industry, after all. *shrugs* Whatever.

There was a pretty big turnout at the conference – I don’t know why I imagined that there wouldn’t be that many people. I must’ve been slightly delusional. After all, the main draw of the conference and the only reason many people were there was because of this:

Studio Ghibli! If you didn’t know, Studio Ghibli is maybe the most well-known Japanese animation studio (for feature-length films anyway). One of its founders is director Miyazaki Hayao, who directed Spirited Away, which won the Oscar for Best Animated Film in 2002. It was the first anime to win the award. I think he also directed most of Ghibli’s films, including Mononoke-hime (Princess Mononoke) two years before that, which was a huge commercial hit – both in Japan and abroad. And most recently, he directed Hauro no Ugoko Shiro (Howl’s Moving Castle), which I really liked. (And this in spite of watching a poor quality cinema-screener version of the movie with bad subtitles.) I liked it so much I went and got the Diana Wynne Jones’ book it’s based on. And then loved the book even more. Hahahaha!

Met a few people I knew there – four people from my FA class, and Mel from CF.

Saw two of my FA tutors’ names on the namelist but didn’t see them. There were several other tutors and lecturers from the faculty who were there, though.

The first half of the conference was rather on the dull side, since it was mostly local people from the industry giving talks. Some were okay – not that boring – but there was one guy, who, sadly, was so utterly boring. He was one of Malaysia’s first animators, apparently. Don’t really remember what he said. It just didn’t stay in my head. There was another guy who gave a preview of sorts of the upcoming series Saladin – played the trailer (which I’ve seen several times already) and showed some concept art of the series (ah, much better). He wasn’t a really good presenter, but the content was just enough to cover his stilted English. Then we had Moon K. Chan of MoonFX. He, at least, could talk. I see he’s had a haircut since I last saw him at the MFX interview I went for. Ahah!

In the afternoon it was finally Studio Ghibli’s turn. We had two guys from the studio, a Mr Okui Atsushi and… Well, I didn’t catch the other guy’s name. It sounded like Shin or Shun though. (The emcee annoyed me by almost consistently saying “Mr Okui-san”, which is like saying “Mr Mr Okui.” Yeesh.) Okui Atsushi is the Director of Imaging for Studio Ghibli, and he was the one that gave the presentation, with the assistance of a translator, who was clearly not from the art or animation industry, since he found translating the animation terms tricky and had to ask the Studio Ghibli representatives to explain some of their terms to him before he figured out how to translate them. 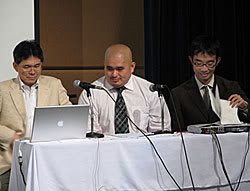 That’s Okui-san there on the left in the light brown coat. The translator is the guy in the middle, and the one on the right is the other from Studio Ghibli.

They started off with an introduction to Studio Ghibli and a “tour” of their studios (yea, plural – there were three) via a slideshow. Like all major animation or design houses (e.g. Pixar and Disney), their studios are just so nice to look at! They aren’t as big as Disney, or as interesting on the interior as Pixar, but still a good deal nicer than just plain offices.
This was amusing: 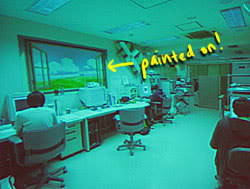 It’s their Computer Graphics (CG) department in… I think it’s Studio 1. Because it’s one of the rooms which has no windows, they painted a window for the staff. Miyazaki-kantoku‘s idea, it seems. Hahah… Cute. (Miyazaki also designed all their studio buildings. Not bad.)
By the way, sorry about the extreme blue-green colour of the pic. Their slide base was blue so my photos came out tinted extremely blue-green.

They have a pretty roof garden too! 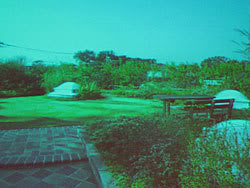 They showed us a montage of clips from all their movies, starting from 1984’s Nausicaa of the Valley of the Wind to 2004’s Howl’s Moving Castle. That was interesting. I’ve only seen Princess Mononoke (got talked into watching it by friend TJ back in Alpha) and Howl. I’ve read the picture book for Spirited Away. Didn’t really like it. The character designs for some characters… Bleh. Typically anime, but somehow I found it a bit on the grotesque side. Probably it was the short, big-headed and big-nosed wrinkled old lady that crossed the line for me.

Of course, the strength of Studio Ghibli’s movies is, I think, the same for any anime studio. It’s not in their character designs, but rather in their storyline. And Miyazaki is pretty good at that.

Okui-san went on to talk about their production process before and after incorporating digital work. It was interesting when he was describing the “analog” way – the totally traditional 2D – but when he started on the digital, that is, when they began using computer graphics for backgrounds and effects and such… My attention waned somewhat. I think the translation time detracted from the whole thing. It couldn’t be helped, of course, since Okui-san spoke in Japanese. But still… Maybe it was also because we’ve learnt so much about digital processes, that the traditional seems more interesting. I dunno.

It was still a cool experience in any case. To get to see and hear people from a major studio in person… I learnt a couple of new Jap words too! LOL.

Oh, they also showed a trailer for the upcoming movie directed by Miyazaki Goro (Miyazaki Hayao’s son) – Gedo Senki (Tales from Earthsea). It didn’t strike me very strongly, although Eileen and I-En are very eager to see the film. I don’t know… It was just a different feeling from when I watched the trailer for Howl’s Moving Castle. There was something about it that really made me want to watch the show. There wasn’t that feeling for Gedo Senki. But then don’t take my word for it. You know it’s subjective.

And anyway, it may turn out to be really good.

Actually, it was a two-day conference, but I had class today so I couldn’t go. Didn’t really want to go either. The programme for the day was more boring. Studio Ghibli only had about an hour in the morning, then the rest of the day went to other things like talks by Transtel and WACOM. So I don’t think I missed anything. Ahahahah!

[ Eileen tells me that the original VCDs for Studio Ghibli’s movies are less than RM20… Her friends have the originals for Whisper of the Heart (1995) and Spirited Away. I wanna get Howl’s Moving Castle! =P ]