I’d been harping about this film since last year so it’s high time I give my opinion on it, after finally seeing it in the first week of February. (I’m hesitant to say that I’m “reviewing” it since I don’t think many of my “reviews” come off as proper reviews at all. They’re more like spoiler-filled analyses with comments. Or just a bunch of comments. heh. Maybe I should change the category name and that link in the sidebar…) 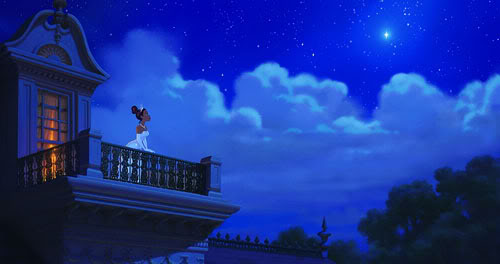 My expectations for Princess and the Frog were moderate, but my excitement levels weren’t. I was eager to see a new Disney film done the old-fashioned way – in 2D, plus musical numbers! – and with a fun albeit probably not stellar story, but at the same time I wasn’t expecting genius. And it pretty much matched my expectations.

In general, I liked the cast of characters. Tiana was hardworking and sassy, but almost loses sight of things that matter in her determined pursuit of her dream. Prince Naveen was very possibly the most egotistical and flirtatious of all Disney princes before him. I can’t recall any other Disney prince or Disney hero that was such a playboy. Good thing he reformed at the end, otherwise I might have hated him. LOL. Dr. Facilier was a smooth-talker reminiscent of Ursula (but a much, much skinnier version – and less capable too) or Captain Hook. Mama Odie was kind of an interesting character who unfortunately didn’t get enough screentime. Her pet snake/walking stick reminded me a bit of those poor flamingoes that the Queen of Hearts in Alice in Wonderland used as croquet mallets. There was also Louis the alligator and Ray the firefly, your prerequisite Disney sidekicks. hahah! (And to my surprise, Ray actually died! I don’t think any other sidekick has actually died in any of the previous Disney films…) Tiana’s friend, little rich girl Charlotte, was strangely likeable. Usually I’d be irritated by a girl who went around gushing and squealing over this and that and whose main purpose in life seemed to be to marry a prince. But – as Jemma and I were saying – you somehow had to like Charlotte. She’s a spoilt rich kid, but she’s also nice to Tiana and seems to have no qualms about befriending someone from a “lower class.”

Animation was great, no argument there. (When is Disney work not great? It’s most 2D-animators’ absolute dream to work there so of course they get the best.) Designs were very much in the “Disney style.” I know some people find it boring, but it’s just so appealing to the eye. Oh, and I absolutely LOVED the Almost There sequence with the shift into the retro look, which is one of my favourite art styles. I have nothing bad to say about that sequence. Visuals, music, it all just worked marvellously. And hey, the predominant colour was even my favourite colour!

I thought Randy Newman’s music was appropriate and kinda fun. Jazzy, with even a tinge of gospel (especially in Dig a Little Deeper, which was actually kind of ironic since the character singing it was pretty much the “good voodoo witch”). Not Alan Menken’s level, but I still quite liked the songs, in particular Almost There. I would’ve liked Ma Belle Evangeline a lot better if that bug didn’t have that accent. Even the villain’s song was almost likeable in the sense that it was… well, it was a villain’s song. Like Ursula’s Poor Unfortunate Souls and Scar’s Be Prepared.

All in all, I thought it was a really enjoyable watch. More so when we’ve been starved of good ol’ Disney 2D animations with that classic Disney look and songs you can sing along to. I’m so glad that John Lasseter loved 2D animation enough to revive it at Disney!