What, can’t I say that on my own blog? ahah… 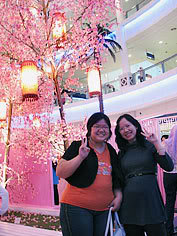 Had a nice 22nd. Lunch, movie (Death Note 2) and then tea at Italiannies (evil Mons decided to humiliate me for the last time before graduation by making me stand on a chair. I knew something was wrong when you people suddenly decided to go there. Sorera hachinin… HIDOI. Matte ne. Issatsu no desu noto miatemasu… Sorekara shiin deru – anta-tachi. Hahahaha :&#80

Anyway, that’s Jan and me at the Curve in the pic on the left. The Curve’s CNY decor is not too bad. Very pink, though. But lots of lanterns. heheh… Will update with the group photo when I get it from Evonne.

Thank you, everyone who sent me birthday wishes! From my parents to the scruffy-looking nerfherder in Corellia Singapore, from the Mons to the tall fella who dares call me “auntie” (means next time you’d better listen to everything I say – respect your elders! Ha. =P )…

I had two unexpected little presents, which delighted and amused me. Seng Hui sent me something like 15MB of illustrations for an anime we both like (I think the illustrations were from the novels the series is based on), and she timed the send so well that the file finished transferring over YM just about two minutes to midnight! hahahaha… It kept me busy for about 20-30 mins, just looking through all the pretty illustrations and discussing ’em with her. Then Gary gave me a pack of playing cards. LOL. Does that mean I’m supposed to play more 99, Gary? Haven’t played that in eons! The cards are interesting though… Oval in shape. Cool. Thanks!!

Death Note 2 isn’t as morbid as it sounds I think. Spoilers coming. Go away if you don’t want to know what happens in the movie.

Not exactly a happy story – although the movie’s ending seems to be more satisfactory than the way the manga ended, from what Angie and the others tell me – but it has its hilarious points. I rather liked watching the intellectual battle fought between genius detective L and (evil) genius student Yagami Raito (Or Yagami Light. Have it anyway you want. I prefer Raito because that’s the way it sounds. heh). Round and round in circles, trying to outwit the other. I think L’s master stroke was writing his own name in the Death Note and specifying his own death to ensure that Raito couldn’t kill him before he solved the case. Sad that he had to die as well, but clever all the same.

L’s obsession with sweet and sugary things was bordering on freaky though. There was an audible “ewww” from the audience when there was a shot of him eating some clear, gooey substance. It was as though the things he ingested became gradually more and more sugary and ‘jelak’ to the rest of us. hahahah… But the actor did a good job portraying the eccentricity of L’s habits and movements.

I think my favourite scene was when L took Amane Misa’s phone and Raito tried to call her in his glee at potentially having discovered L’s true name:

L: Moshi-moshi? (Hello?)
Raito: *look of annoyed/horrified recognition of the voice* … Moshi-moshi te NAN DE? (What do you mean ‘HELLO’?)

hahahahahahaha… I probably laughed the most at that scene. The look on Raito’s face when L answered the call. LOL.

2 thoughts to “Happy Birthday to Me.”