Well, it started off fine, actually. I went to submit my thesis along with three of my classmates – yay, begone thou annoying thing! And then the celebratory drinking began… at 3pm in the afternoon. In the 3 hours or so that I was with them, we finished two bottles of red wine (I had two glasses of wine – one from each bottle; I don’t know how many glasses they each had) and when I left them just before 6, they were in the middle of sharing a huuuuge jug of beer with two others who’d joined us. In all probability they drank until some ungodly hour.

Tangent: I don’t mind spending time with my classmates, but it’s difficult when the large majority of them equate fun and hanging out with things I detest. I have discovered that I have certain specific reactions to large amounts of alcoholic drink, and any amount of drugs (obviously I don’t mean medicinal drugs) – and none of those reactions includes happiness or apathy. It apparently varies from outright disdain and disgust to disappointment and deep sorrow, depending on the person. (Lotsa Ds in that sentence there. haha) *continues dull story of yesterday*

At one point before I left I was sooo choked up by the smoke that the five of them were emitting (I know “emitting” isn’t the ‘correct’ word to use, but I feel it’s absolutely appropriate – so there) that even up to an hour later, I still felt vaguely like I could smell smoke around me. sigh.

Anyway, some stuff was troubling me so I decided to try and cheer myself up by calling the birthday girls, Lydia and Eileen, and having a good gab with the gals. Actually, I called Lydia when I was still with the others, in an attempt to both distract my mind from sad thoughts and also to remove myself from the smoke cloud for a while. I phoned Eileen when I got home. Both phone calls were wonderfully relieving for as long as they lasted. =)

Was supposed to go and see The Rat Pack – Live!, some sort of jazz performance, at about 9pm. I’d planned to catch the 8.30 bus – by my calculations that ought to have gotten me there just in time. To be safe I really should have tried for the 8pm bus, but I thought that 8.30 should be fine. Then at 8.10 my flatmate, Sarah, came to ask me for some help with her thesis – some formatting issues with the Table of Contents and such. I managed to sort the major problems out but by that time it was 8.25 or something and I wasn’t sure if I could catch the bus or not. If it was a little late, then good. But at the same time if it was 15 minutes late, I’d not make it to the show in time anyway. I got to the bus stop at 8.30 sharp (it’s practically in front of my flat) but there was no bus in sight. Waited 10 minutes and then decided that either it had been early (the bus has an aggravating habit of being early when I’m not, and being late late late when I’m early) or that it was going to be way late and either way, I wasn’t going to see the show.

Still, I wasn’t too upset. I’d have loved to see it, but then I didn’t mind helping Sarah. Last-minute nightmares with technology are never fun (thesis deadlines were today, 20th August) and I knew that if I was in her position, I’d appreciate having someone to help.

Tangent again: I can remember all too clearly times when I was desperate for help when project deadlines were nearing and I had no solution but then friends came to my rescue… like Jo helping me with that aggravating photography rule-of-thirds assignment, Jason bringing over his brother’s entire movie collection when my “wonderful” group leader told me at the eleventh hour to change the mock-trailer I was editing and I needed new movie clips, Eileen lending me the use of her computer for rendering when my FYP group was in dire need of extra render power, and Kae Ee driving me to MidValley to look for a print shop that could print my 10R photo in an hour. Friends like that you don’t forget. Ever.

It made me a little bit happier, being of real help to someone for a change rather than being the quiet, almost invisible one in a group of friends (sometimes I’m honestly tempted to type “friends” – with the inverted commas).

I spent a good part of the night mulling over things before deciding to turn my thoughts elsewhere and make a belated birthday card for Ewa. Don’t know what possessed me to try replicating the Chinese brush painting style with my Copic markers. I don’t have my Chinese painting books with me so I had to scour the internet for picture references and some tutorials. Finding tutorials was easy, attempting to reproduce brush strokes with brush-tipped markers wasn’t quite as easy. Practiced on a piece of paper before trying it on the actual card. The results weren’t half bad. Not bad at all. This was one of the better practice attempts: 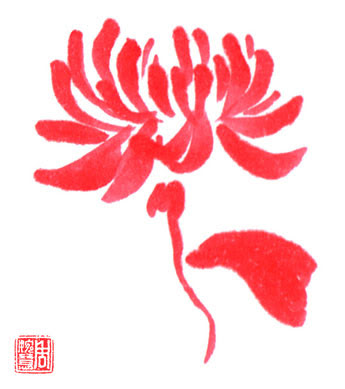 Not perfect, certainly, but considering that it’s not an actual brush and paint, it’s passable…