Jo and I suddenly decided that we’d go and watch Iberia. From the summary on the GSC website, it seemed to be some sort of Spanish movie that involved dancing. The Spanish element was tempting enough, but add in dancing and it was too tempting to miss. (And we wanted to run away from FYP.

) We didn’t really expect much dancing la, but figured it would be cool to watch anyway.

It was almost 90 minutes of dancing only.

(Well, there was a short piece in the middle which was just this guy singing and another guy playing the guitar, but one kinda forgets it amidst all the other performances.)

It’s supposed to be like a tribute to Spanish composer Isaac Albéniz, using his “Iberia” suite. So it’s all about the music and the dance interpretations of the music. The dances are mostly a mix of Spanish traditional dance and contemporary dance – and some ballet. It’s not a continuous dance, but goes from one piece of music to another.

I highly recommend it for people interested in dance. Check out the choreography. I really like how Spanish flamenco is “strong” in rhythm and movement yet graceful. Their group performances were very nice to watch. Movements and the sound from the castanets/tap shoes synchronised so well! I kept wondering how they could click the castanets in such perfect time (perfect to me la; I can’t tell if one of the castanets was off by a beat or anything). Also probably good for those who like to watch theatre and music. Wonderfully simple sets, and beautiful lighting. (Their shooting studio must be huge from the look of it.) And their pianists and guitarists! Whoa… Heheh.

So, go watch! I know I’ve many friends who like dancing or music or watching theatre or all of those. I think most of you’d enjoy this. =) Right, Jo? 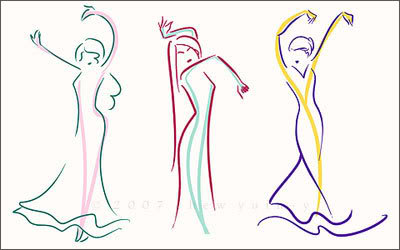 (Yes, I used photographs as reference for the poses. hahah)

One thought to “Iberia”