I spent the entire afternoon yesterday holed up in the study room drawing. More like – drawing, adding detail and inking. I suddenly had the impulse (since the night before) to draw ancient Chinese apparel or something like it. Told Anna that perhaps I’m subconsciously “sulking” because I didn’t get to watch The Banquet. Not that the story’s interesting, but I’ve had like 5 or 6 different people all telling me that I should watch it because the set design and costumes are fantastic. Doesn’t help that one of the animes I’m watching now is a historical fiction story set in ancient China. Sigh.

Anyway, it’s fun to draw in the intricate stuff sometimes.

(When you use one A4 paper per figure, that’s more than enough space for small details…) My mother said to try combining the details with the Daly-esque style I was going with the days before, and I will – but not now. Hahahah! This is just one of those times when I feel like going slightly more realistic and detailed in pics. *artist mood swings* 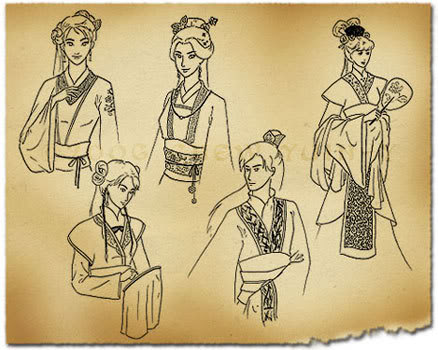 I’ve another three but those aren’t done yet. Heh. I’ll get around to colouring all these – some day. La di da…

Happened to catch the ending of this segment called Animex Musix or something like that on the Animex channel. Apparently, it’s a half-hour where they screen Japanese music videos. The one that was playing when I turned on the TV was apparently a song by some guy called Ken Hirai (or Hirai Ken, if you want to be true to the Asian way of having surnames first). I liked the song (“Bye My Melody”) and later went to dig out the song from the recesses of cyber space. Downloaded a bunch of other songs by the same guy just to see how they were and found a few others that I liked. But right now my favourite is the one called “Sekai de Ichiban Kimi ga Suki.”

First of all, I really like how the song sounds. It’s more along the lines of swing or jazz – something like what you might hear at Christmas – and that’s one of the types that I love. Secondly, I delighted myself by correctly translating the title without any reference. Ha! *perasan-ness* I guessed that it would translate to “I Love You the Most in the World” and when I did a Google search for the translation of the lyrics, I found I got it spot on. Didn’t manage to find the translation for the whole song, but just knowing that I could figure out that title on my own was… Well, I’m happy. 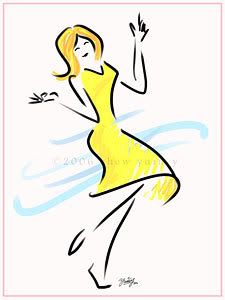 The style I used was inspired by the really really cool Donnachada Daly. That’s technically my 8th piece in that style – did 7 others before that on Monday and Tuesday, but I’ll save those for another post.

I’m not as good as Daly is, of course, but I suppose it helps that I’m already inclined in a similar direction. Still working on the fluidity and strength of composition/poses in my pictures. Practice, practice, practice! 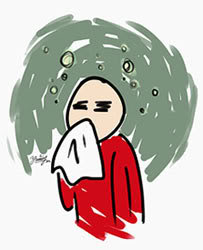 I wanted to try a different style of (digital) colouring. No smudge brush at all. Dug out an old sketch to test it with. Didn’t feel up to drawing a new pic. Conclusion: It’s a little tricky, but does give that painterly effect in Photoshop… 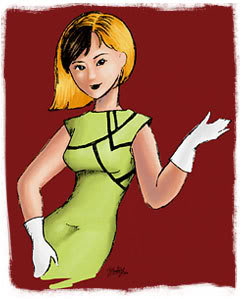 Hm. Must be the flu getting to me. Am in one of those “why-do-I-bother-to-blog-and-does-anyone-care” moods…

Let’s face it. I’m quite the Disney fan.

Leaving out the 3D ventures (both Pixar- and non-Pixar-related like Chicken Little), and some of the newer 2D works (never did see Brother Bear or Home on the Range), the older Disney animated features always held a sort of wonder for me. The storytelling, the art, the music. And geez, the emotion those animators could put into the characters! To this day, Dumbo remains the only animated film ever to make me cry. That’s probably the reason I almost dare not watch it now.

It wasn’t just the feature films for me, but also the Disney cartoons and shorts. My mother tells me I used to watch so much Donald Duck that she was worried I’d start talking like him. LOL. Fortunately I probably talk more like an Elf now than like a duck.

END_OF_DOCUMENT_TOKEN_TO_BE_REPLACED

Iiiiish. Just lost my entire post because the connection decided to die on me when I tried to submit the post.

In brief, I’m in something of a “Disney” phase right now. Probably due to two reasons:

All that has, in turn, influenced my art of late. For whatever reason, I haven’t been feeling very “original” or anime-ish recently. But Disney is in, yo. Hahaha! 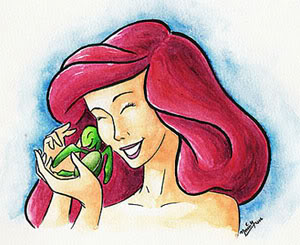 Remember the news in the papers lately about the leatherback turtles in Malaysia verging on extinction? I thought it’s so sad.

Made me wanna draw Squirt from Finding Nemo. But Squirt alone didn’t look interesting. So I added Ariel. I’m also in something of a “traditional” art mood these days, hence the watercolour. Rather like how it turned out. =)

Go the Distance from “Hercules” is one of the songs that I love to hear and sing. (Some others include Out There, God Help the Outcasts, Reflection, One Jump Ahead, He Mele No Lilo, Cruella De Vil, Just Around the Riverbend, Out of Thin Air…) Anyway, Go the Distance inspired today’s effort at art. Don’t laugh: 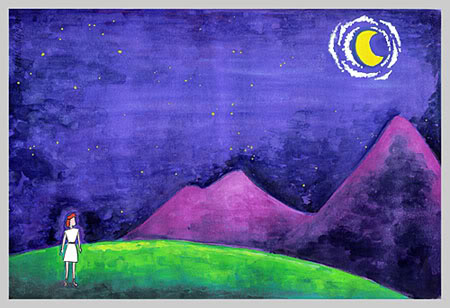 It’s the first time in maybe a year that I’ve touched my poster paints. O_o (The scanner didn’t pick up the colours that well – the sky and mountains shouldn’t look so faded… Maybe I’ll fix it another day. Kinda late now.) Generally I prefer watercolour, but every now and then I feel like getting bolder, brighter colours. Poster paints also result in simpler pictures from me. Hahah… But I handle details better in watercolour. With poster colours it becomes very much more a colour- and shape-based piece. It doesn’t look quite as nice as I wanted it to, but it’ll do. I’m no Michaelangelo. 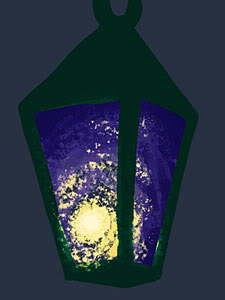 For some reason, the word “capture” eventually brought to mind Tinker Bell… Caught and trapped in a lamp by Captain Hook.

I like how I can just do quick, random stuff for IlloFriday. Heheh.

Yay! I made a 2D animation of a ball smacking into a wall.

But I’m quite happy.
After all, it’s my first real hand-drawn animation! It’s miserably basic, considering that I major in Film & Animation, but hey, it’s a start.

See? *grinz*
I looped it once because the original sequence consituted what – half a second? Can’t see anything like that. Hahah… I did think to make the ball slide down the wall to the floor, but I figured I should go sleep already. *sigh*

At least now I’m fairly satisfied. Because I achieved something today =)

Perhaps I’ve overdosed on the reality show Project Runway… But season 1 and 2 were so cool to watch! It’s something designers – fashion or no – can relate to. As my friend Evonne said, it’s a rather accurate portrayal of most designers/artists’ lives: small budgets, too-close deadlines, stress, competition and harsh critics.This is the only reality TV show that I’m really keen on at the moment. Last time, it was Survivor (from season 2 until 4 or 5 I think). American Idol… I never really followed. The auditions were a hoot, but I didn’t really track the series after the auditions. Malaysian Idol was interesting in season 1 – Jaclyn Victor was good.

Quick intro to Project Runway for the uninitiated: Reality TV show. Competition for fashion designers. Every episode there is a new challenge, and the one with the worst outfit gets kicked out. The designers compete to be one of the final three, who will present their own collections on the runway at Olympus Fashion Week in New York and thus be in the running to win $100, 000 to start their own line, a spread in Elle magazine, and a mentorship with the Banana Republic design team.

I had my favourites in both seasons of Project Runway (clear testament to the sort of fashion sense I favour). In season 1, my favourite was Austin Scarlett, who was in the last four, but sadly didn’t make it to the final three, although many people think he should have. In season 2, I highly favoured Chloe Dao and Daniel Vosovic, both of whom made it to the final three (yay!) and one of them won.

*points at picture above*
That comes from all the Project Runway influence coupled with my new brush pens. (I’m trying to learn how to ink my drawings a different way – with nice, tapered lines, not the ‘flat’ type I’ve been doing all along.) Oh, throw in the World Cup anticipation as well. Heheh… (FYI – that’s Argentina [first two], Germany, Brazil and Spain.

) Rather nostalgic in a way. I had my own “collection” during the last World Cup. Looks like I may have another collection again. LOL.

When I think about it, if I had managed to be friendlier with the sewing machines at school, I might have considered fashion design more seriously. But as it was, sewing machines and I were generally on a “tolerable acquaintance” basis, nothing more. Hahah… Still, perhaps illustration and graphic design and stage direction are more my thing, eh?

Things learnt through today’s post: Okay, so Photobucket links do work. I wonder what went wrong the other day. O_o But images don’t align that nicely here – no matter what the host. The words come out with barely 1 pixel between the edge of the pic, and the text, if I align the pic to the left like I usually do in Tabulas. Ish.
The Custom fields… How do I use those? Hm.
June 5: Whee! Success! (After an hour’s struggle with the instructions and PHP. Gosh, I feel dumb when handling PHP…) But, bleh. It displays everything, not just the fields I fill in. So it’s either I fill in everything or put dashes in for the blank fields…

I have a new blog.

Congratulations, ye who know of its existence. I haven’t spread word of this blog just yet. So be honoured, all. Hehe..

Am still in the ‘adjustment’ process. Tabulas was just so user-friendly to me; WordPress takes a bit of adjusting to, layout and admin-wise. But basically I’ve changed everything but my writing style and the blog name.

I’m considering moving my favourite posts from my Tabulas blog over here. Won’t move all the posts if I do. That’s be too tedious.

This being the ‘inaugural post’ and all, perhaps I should explain the blog name. I never did explain it over at Tabulas. It’s simple enough, anyway.
Ind Elwen Tinúviel.
English translation: Thoughts of Elwen Tinúviel.
If you didn’t know that was Elvish… All I have to say is: “What?! You should know me well enough to guess that.” (I don’t need to explain “Elwen Tinúviel” to you, do I?)
Why Elvish?
1. Because I can. Muahahah.
2. No one else I know has an Elvish blog name.
3. It sounds elegant. 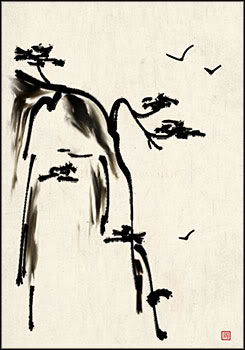 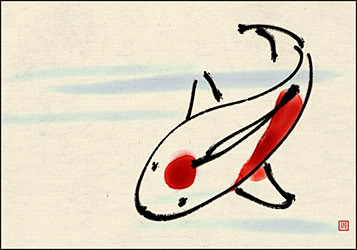 My two latest experiments in digital Chinese brush style. Somehow not quite as satisfactory as the first one, but maybe that’s because I’m not as “emo” as I was when I did that. (Don’t you just hate it sometimes when you can’t seem to repeat an initial success? Makes it seem like a fluke…)

I learnt something new today… Photobucket links don’t seem to do well in WordPress, but Imageshack links work fine. I wonder why.