Cars sped into our local theatres today, and I say it wins the summer box office race this year. (This leg of the circuit, anyway. There’s still Pirates of the Caribbean 2 coming up in July, so who knows..?) But it definitely outshines Over the Hedge for me. Hedge was good in its own right, but Cars was just one gear higher.

I think Pixar delivered another great show here. It was technically flawless (as always), with a pretty good Randy Newman soundtrack (I liked it particularly during the race sequences; and it has a slight country/retro feel to some parts), and most importantly, good storytelling. It was funny, and it was also touching. I felt the story had a real ‘heart’ to it. (Loved how it ended.) There was a point they wanted to carry across, and they did it. Doesn’t matter whether you’re a fan of the racing circuit or not – it’s enjoyable all the same. You didn’t have to love fishes to enjoy Finding Nemo, did you? 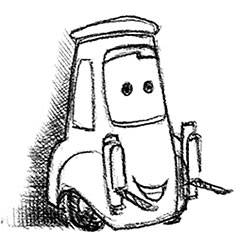 I was particularly enchanted by Guido, the little Italian forklift. *points to charcoal sketch* Sure, he only speaks two words of english (“Pit Stop”), but he’s funny jabbering in Italian! And maaan… Can he change tyres! The statistics on the official website say he can change a tyre in 2.5 seconds flat. To watch him stun Chick Hicks’ snarky pit stop team in the last race is just priceless. Hehe…
Guido’s boss, Luigi, is almost as funny, being a die-hard Ferrari fan. He just about faints at the sight of a Michael Schumacher Ferrari coming to his humble shop to get a new set of tyres at the end of the show. They even got the real Michael Schumacher to voice that Ferrari too.

The main characters and the other supporting characters were just as interesting – but I don’t feel like profiling all of them here. Look up the website if you want to see all of them.

Absorbed as I was in the story, I was ever the FA student. I found myself thinking things like, “Gosh, how did they rig those cars for expressions,” “So many lights… Render time must’ve been insane,” and, (during the racetrack scenes) “How many cars did they model for that??”

If you do go to see it – which I highly recommend you do – stay through the end credits. They parody the early Pixar movies in a most amusing way. (E.g. “Toy Car Story” and “Monster Trucks, Inc.”)

Oh! Don’t miss the extremely cute car flies in the movie. Those drew chuckles from the audience every time they appeared. =D

UPDATE (June 9)
Cars, having by now parked itself comfortably in cinemas worldwide, has auto-matically resulted in a truckload of reviews out there now – including a pretty detailed rundown of the car/race references in the film from CFMMU’s own “car nerd.” (And if you think about it, when two people like Gim and I who don’t often drop high praise on films suddenly both do so, it’s gotta be something to at least consider seeing. *wink* )
The LA Times also provides us with a glossary of sorts to the automotive allusions in the show. You might want to read Gim’s review and this glossary before speeding to the nearest cinema to see the movie – sometimes it’s more fun knowing all the little hidden details rather than to just follow the road blindly. I personally liked knowing that the Ferrari was really voiced by Schumacher and that Chick Hicks’ number (86) is a term for someone who’s thrown out. Nice to feel like you’re in the driver’s seat sometimes, y’know.
Chuck Graham over at the Tucson Citizen opens his review with:

“John Lasseter must be the reincarnation of Walt Disney himself. How else can you explain Lasseter’s unbelievable success as the creative head and heart of Pixar pictures?”

I nearly laughed out loud when I read that – because when I was writing the above review last night, I’d almost put in a line that read “John Lasseter must be the new Walt Disney.” Hahahahaha

Some others you could check out:

Of course, there are the negative reviews as well. I’ll be fair – it’s not such a great movie to everyone.

If you stayed long enough in the ending credits to see the tribute to Joe Ranft and wondered who in the world he was, well… Ranft was a key player in Pixar’s creative team, who worked on many of the early Pixar films – in the story department, and even in the voice acting. He voiced the penguin Wheezy in Toy Story 2 and Heimlich (the fat caterpillar) in A Bug’s Life. He was killed in a car crash last August, which was tragic news to the animation community. The Hollywood Reporter has the lowdown on the sad event.

Gosh, it was fun writing in all those car/vehicle puns and such. XD