Peter Quill, sometimes called Star Lord, discovers an orb in an ancient temple a la Indiana Jones and proceeds to tumble head first into a galactic chase sequence in which the chaser and the chased switch places a couple of times. He picks up some new allies in the form of a “daughter” of Thanos called Gamora, a genius talking raccoon called Rocket, a tree-type creature called Groot, and the a hulking thesaurus (but don’t call him a thesaurus) called Drax the Destroyer. He also picks up new enemies in the form of Yondu, whose trust he betrayed when he absconded with the orb, and the genocidal maniac Ronan the Accuser.

The short version: Not bad, it’s entertaining enough. I prefer Avengers, though. I’d rate it about 3 out of 5?

The longer version: … I can’t muster up enough energy to string everything together in long paragraphs, so I’ll just ramble on in point form as things come to mind. (And besides, so many other reviewers out there – proper critics too – have written nice essay-style reviews so you can go read those

A second viewing allows for several things to happen – more enjoyment of the fun scenes, more time to observe the finer details of design and composition, and a closer look at the story and dialogue. 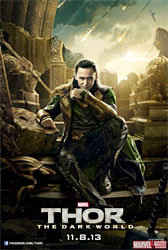